Sights in Bansko and the Region

HomeNewsSights in Bansko and the Region
Back

Bansko is a town in southwestern Bulgaria rich in history. Apart from skiing in and around the city, there are many places worth visiting.

The church was built in 1835, and in 1850, a stone bell tower was built in the yard, with the function of a clock tower, which counts the hours to this day. The temple is located in the city center, and is a unique Christian place of worship and architectural heritage. The church is three-nave, domeless, painted with amazing frescoes and several icons by Georgi Molerov. 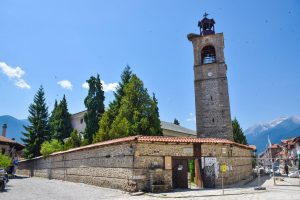 The birthplace of the revolutionary poet Nikola Vaptsarov is located in the center of the city, at the square bearing his name, where a monument to him stands majestically. The place is one of the first museums in the Pirin region, with the status of a museum since 1952. In this house, he wrote some of his most emblematic poems, and at the moment, it holds much of his work and history. “The Benina House” is the birthplace of the Bulgarian writer Neofit Rilski (Nikola Benin). The house comprises two parts and has undergone major repairs and restoration. It has museum status since 1981. The house itself was built in the 17th century by the Benini family. It is located next to the Holy Trinity Church and stores over 400 documentary and material items. The site has been declared an architectural and historical monument of culture of national importance. The majestic tree is a coniferous tree from the species Bosnian pine. Stunning in size, approximately 26 meters high, 2.48 meters in diameter and 7.80 meters in circumference. Its age is estimated at more than 1,300 years, making it the oldest coniferous tree in the country and one of the oldest trees in the world. The tree is located in Pirin Mountain between the Banderitsa refuge and the Vihren refuge. 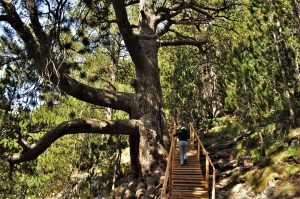 The church is located in the area of ​​Betolovoto, 7 km away from the town of Razlog. The church is a small one-nave, one-apse building, which is called “painted” probably because of the frescoes it had. It has been declared a cultural monument. During excavations around the temple, a cross from the 11th century and four graves were discovered. During the excavations on the south side of “The Painted Church,” remains of an earlier church were found, which dates back to the 5th – 6th century.

The three churches in the area of ​​Krushe – “The Painted Church,” “The White Church,” and “St. Nicholas” indicate the existence of a large settlement from the time of the Second Bulgarian Kingdom. Around the churches, there have been a number of archaeological discoveries made – remains of solid foundations, many fragments of household and building pottery, Christian burial sites, and coins from the 12th century. 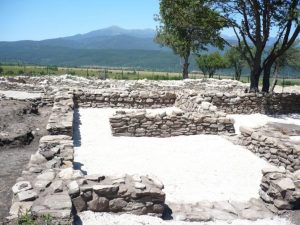 The so-called “Nameless Town” is an exceptional and charismatic place, hidden between the towns of Bansko and Dobrinishte. This is an ancient fortress that is more than 3,500 years old. It was discovered quite by accident in 2003. The remains cover an area of ​​approximately 25 acres. Archaeological excavations have been carried out. At the highest point is the chapel “St. Nicholas,” from where you can see the uniquely beautiful waterfall “St. Nicholas.” A charming and mystical place worth seeing. The whole walk lasts about 70 minutes in both directions The village of Dobarsko is located 17 km away from Bansko, and it has an unsolved mystery, namely the church St. Theodore Tyron and St. Theodore Stratilates Church. It is said to have been built in 1614, but a large marble slab embedded in front of its altar testifies that this happened in 1112.

There are theories according to which this slab was transferred from another place and is a sign of continuity, but in architectural terms, the temple is a three-nave basilica, typical for the period of the First Bulgarian Kingdom. It is located on a modest 160 square meters; however, it is not its size that is impressive, but rather the images painted on its walls. There are many more mysteries, legends, and uniquely beautiful and magical sights hidden in southwestern Bulgaria. Everyone who has visited this little paradise is bound to fall in love with it and come back to visit it again.